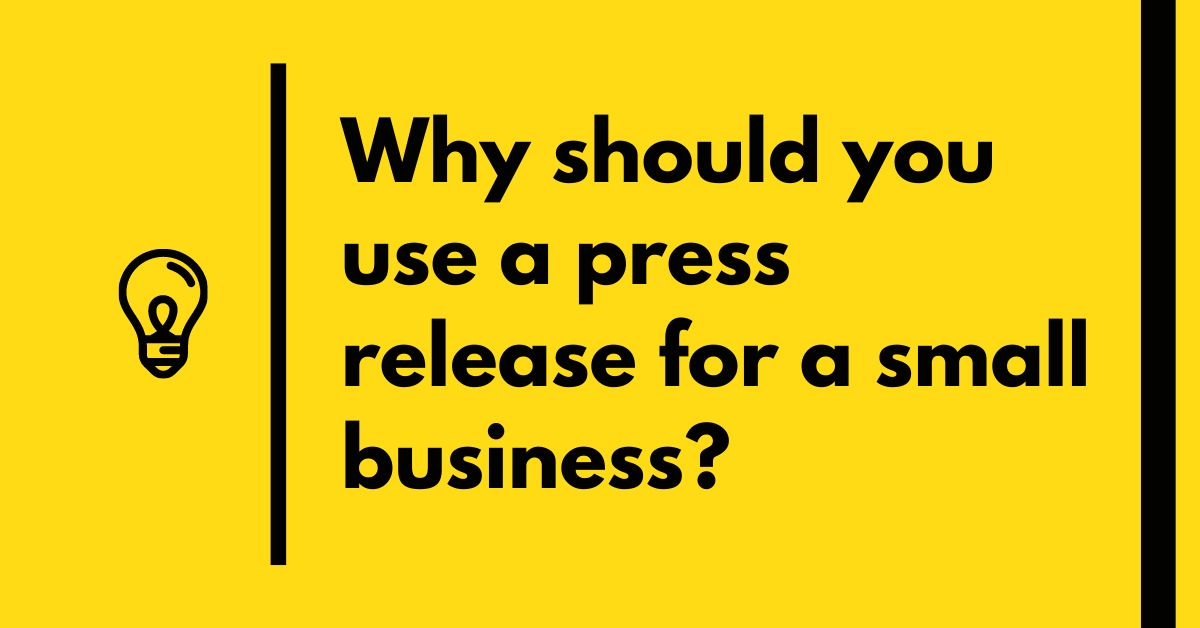 Press releases have been in existence for decades. In this article, we will share with you Why should you use a press release for a small business?

Yet, their significance is realized to a greater extent in today’s age of internet marketing more than ever. Compared to the myriad of tools and strategies available to marketers, press releases are often the go-to technique that guarantees them quick and effective results.

What online businesses are not aware of, but one that large corporations have exploited time after time is the concept of free publicity. And a well-written press release offers this basic service even to the smallest businesses, for no additional charge.

Unbelievable as it may sound; the exploitation of this seemingly simple yet difficult to implement strategy can propel one’s business from relative obscurity to the limelight that it potentially deserves. By communicating relevant newsworthy information to the relevant sections of the media, accomplished through a press release, online businesses are entitled to a fair share of the spotlight, one that they so desperately need and crave.

Press releases are not restricted to any particular niche or industry and have been utilized for a wide array of products from cars to digital cameras in the virtual space. Even non-profit organizations have issued press releases to inform the public of the various charitable and fundraising activities.

The versatility offered has been often undermined and overlooked in previous years. However, with the increased levels of competition prevalent in today’s global economic scenario, especially in the online space, this important component of marketing has gained ostentatious importance.

Before delving into the matter of how to create a compelling press release and getting it published, I would like to point out the added benefits that press releases offer to businesses.

Previously, only utilized to the advantage of large corporations, free publicity has become a commodity that every online business wants a fair chunk of. With publication editors always looking for relevant and contemporary news to include in their magazines or journals, press releases are a sure shot measure towards attracting their attention. So if it is not already obvious enough, here are some additional reasons as to why you as a business owner should issue a press release.

Press releases are the most simplistic and standard method of conveying any latest developments or news to the intended customers. A basic tool of communication, they often accomplish tasks that some advanced techniques such as online marketing find difficult to realize.

With the desired publicity, there is a high probability that the press release will circulate in popular and social media, thus garnering even more free publicity. And the more free publicity you receive, the higher are the chances of realizing your firm’s potential sales and revenue. A simple and straightforward strategy, its success for an online business depends on the content of the press release to a large extent.

Creating a compelling press release and getting it published

Major publications such as the New Yorker or the Sun receive thousands of press releases per week. Mindboggling as it may seem, strict adherence to a fail-proof format will guarantee your press release a higher chance of getting published and getting that free publicity.

A well-written headline that captures the essence of the press release, followed by a brief paragraph entailing the minutes of the release, should capture the attention of the editor who diligently scours through the hundreds of similar releases on a daily basis.

If the press release is deemed relevant to the requirements of the publication, the additional information and contact details enlisted would be published in the news section of the publication. Formatting also plays a crucial role in being selected for publishing. The implementation of a simple yet elegant font, relevant bolding and underlining, indeterminably play a part in capturing that short attention span of the editor.

Additionally, timing also plays a crucial role in garnering the favorable attention of the target customers. A press release during the weekday has received only half the publicity compared to one that was released on a Sunday. As such, timing your release for a weekend would optimize the already substantial outreach of the informational content related to your firm.

With so much on offer, press releases have captured the attention of online business owners and are being increasingly utilized to gain some much-desired publicity. This is evidenced by the surge in their popularity on social media. Previously unknown online businesses have come to the fore through strategic press releases that have undeniably contributed to their burgeoning reputation.

Press Releases are an invaluable and indispensable tool for public outreach and marketing. The equivalent cost for advertising often runs into thousands of dollars, which a small online business could ill afford. As such, a marketing strategy focused on utilizing this multi-faceted tool could provide that much-deserved boost that could propel your business to greater heights, at no extra cost!

How to become successful in business?

Experience the Benefits of Ecommerce: Unlocking a World of Possibilities!

Unlock the Secrets to Finding the Right Product for Your Business!